Queen Elizabeth’s reign made her the second longest serving monarch in the history of Great Britain.

She has overtaken the reign of George III in length of time but second only to Victoria.

She has reigned a total of approximately 59 1/3 years up to this month of May, since ascending to the throne upon the death of her father, George VI on February 6, 1952.

During her reign, it is the era of: computers, man landing to the moon, the dismantling of the Soviet Union, the medicinal breakthrough of transplants, the evolution of technology in communication, medicine and space exploration.

Last April, the Queen celebrated her 85th birthday. Next year of 2012,she will be commemorating her Diamond Jubilee, when it will be 60 years since she came to the throne.

Queen Victoria, who died in 1901 after 63 years and seven months on the throne. However, in due time, Queen Elizabeth is set to overtake Victoria’s record in September 2015, at the age of 89. 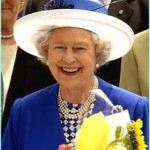