The 2008 and 2010 champion overcame a slow start and was broken twice in going 4-0 down in the first set to his Brazilian opponent but recovered to take it on a tie-break.

Nadal’s progress from there was an overwhelming victory over the Brazilian.

The seventh time French Open title holder, certainly could have had an easier first-round challenge than the one presented by Bellucci.

The Brazilian rank 80th in the world produced a series of forehands to get Nadal on the back foot, only to implode in the tie-break after the second seed regrouped.

A further setback by Bellucci in the second set allowed Nadal to extend his lead and, although the Brazilian registered a break in the third, Nadal was always unlikely to be derailed.

The winner between Jo-Wilfried Tsonga and Guillermo Garcia-Lopez clash for a place in the last 32, is a potential quarter-final opponent for Nadal.

Murray produced a near-faultless performance to open his Wimbledon campaign with a crushing victory over his Russian opponent.

Davydenko had won four of their nine previous meetings with Murray but none of those came on grass.

Murray looked composed and focused on every point, combining subtle touch with ruthless power to destroy the resolve of his error-strewn opponent.

The Scottish was given a standing ovation by the Center Court crowd and will play Ivo Karlovic or Dudi Sela on Thursday. 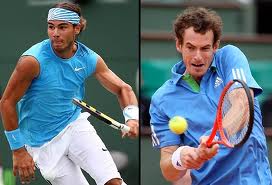