The second-ranked Nadal improved to 12-0 in his career against the unseeded Verdasco.
It was a grueling match for both the Spanish pair that lasted three hours and 38 minutes and was decided by a mistake-filled third tiebreak.

The left-handed Spaniard, who has burns on the index and middle finger of his right hand, had to be careful with his backhand because he uses the right hand to help set up the shot. He wrapped the fingers in gauze for the match.

Nadal burned the fingers when he touched a hot plate at a restaurant earlier in the week.

In the quarterfinals, Nadal will play seventh-seeded Mardy Fish, who beat Richard Gasquet 7-5, 7-5.

World no. 1, Novak Djokovic also moved into the quarterfinals by beating qualifier Radek Stepanek 6-3, 6-3, improving to 31-0 on hard courts this year and 55-1 overall. 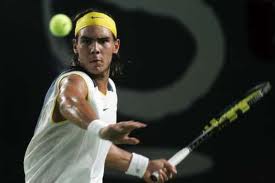