A group of researchers is using the monkeys to compare gastric bypass surgery with weight loss from forced dieting.

One goal is to try to figure out the hormonal mechanisms by which the surgery can quickly resolve diabetes, so that drugs might be developed to have the same effect.

The study will do what cannot be done with people, kill some of the monkeys to examine their brains and pancreases.

The monkey’s daily diet consists of dried chow pellets, with about one third of the calories coming from fat, similar to a typical American diet, according to Kevin L. Grove, a neuroscientist who directs the Oregon program, though the diet also contains adequate protein and nutrients.

They can eat as many pellets as they want, and are treated to peanut butter, popcorn or peanuts. They also drink a punch with the fructose equivalent of about a can of soda a day. They might consume about twice as many calories as a normal weight monkey.

Researchers say the high fructose drink appears to accelerate the development of obesity and diabetes. Still, about 40 percent do not put on a lot of weight.

At the Oregon National Primate Research Center, a colony of monkeys has been fattened up to help scientists study the twin human epidemics of obesity and diabetes. The overweight monkeys also test new drugs aimed at treating those conditions.

The corpulent primates serve as useful models, experts say they resemble humans much more than as rats do.They tend to eat when bored, even when they are not really hungry. And unlike human subjects, “non human primates don’t lie,” Dr. Grove said. “We know exactly how much they are eating.”

Some of the obese monkeys are kept alone in cages for months or years to monitor their food intake which also limits their exercise.

Demand for the overweight primates is growing as part of the battle against the obesity epidemic according to researchers.

Rhythm Pharmaceuticals in Boston tested its experimental diet drug on some of the monkeys. After eight weeks, the animals reduced their food intake 40 percent and lost 13 percent of their weight, without apparent heart problems.

The primate center here, part of Oregon Health and Science University, has more than 4,000 monkeys. About 150 of them are the rotund rhesus. Some receive daily insulin shots to treat diabetes, and some have clogged arteries. One died of a heart attack at a fairly young age.

One rhesus, who weighed a hefty 32 kilograms, ate “nothing but an American Heart Association recommended diet,” she said. (Rhesus typically weigh around 10 kilograms.)

Some companies see no need to use primates to study obesity and diabetes, saying it is almost as easy to do human studies. Monkey studies can cost up to several million dollars. And ethical reviews must precede a study.

Animal rights activists say primate studies, subject animals to needless suffering, like the stress of being caged. And they question whether the studies are needed.

They point to studies by Dr. Grove that when pregnant monkeys ate the high fat diet, their offspring had metabolic problems.

Dr. Grove defended using solitary cages, saying he need the animals separated so they could snack between meals, since that is a major reason people gain weight. “Our research model is a sedentary lifestyle with calorically dense diets,” he said.

He said the study found the diet induced chemical changes in the fetuses’ brains that might have been responsible for the problems in the offspring.

The findings may also apply to humans. The studies also found that a healthy diet during pregnancy reduced troubles in the offspring. 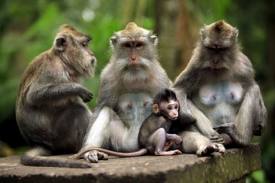