There were some doubts about both men heading into the tournament, with Nadal having not played since losing to Florian Mayer in Shanghai a month ago while Fish was nursing a hamstring injury.

Nadal certainly did not look rusty in a first set he dominated but his opponent settled into the match in the second and could easily have come out on top in a topsy-turvy decider.

The Spaniard next faces great rival Roger Federer, who beat Jo-Wilfried Tsonga 6-2 2-6 6-4 in the opening Group A match earlier.

Fish’s only win in eight previous meetings with Nadal came in Cincinnati this summer when he was at the top of his form, which was far from the case in the early stages.

The American who turns 30 next month, at least held serve at the start of the second set, and in the next game he broke through, earning the reward for a more aggressive approach.

Nadal admitted he was fortunate to begin his campaign with a victory. The Spaniard said: ‘It was a very important victory for me, for the confidence, to start the tournament with positive feelings.’ 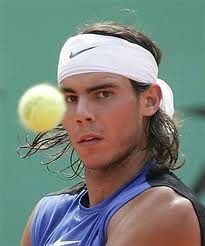