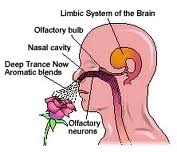 Human sense of smell is closely related to memory.

It is linked to the olfactory bulb, a structure in the brain, beneath the frontal cortex that receives nerve impulses from the nose, has direct connections to areas of the brain which control emotions and cognition.

Dr. Wilson, professor of child and adolescent psychiatry at New York University, said: ‘Unlike information from your eyes and ears that has gone through many connections to reach the frontal cortex, the olfactory system is just two connections away. The result is an immediate pathway from the environment through our nose to our memory.’

Impairment in the sense of smell is associated with Alzheimer’s disease, Parkinson’s disease, schizophrenia, and even normal aging.

As to why smell weakens remains a mystery, but the Langone team have pinpointed a half-inch-sized area of the rat brain called the piriform (olfactory) cortex where the problems appear to occur.

Dr. Wilson and his colleague Julie Chapuis trained thirsty rats to identify different smells by rewarding them with sips of water when they got it right.

The researchers, who published their finding online in the journal Nature Neuroscience, then anesthetized the rats and inserted electrodes into their brains.

They found the odors the rats could tell apart produced distinct patterns of electrical activity.

The team then gave another group of rats a drink whether they got it right or wrong. This effectively dulled their sense of smell and their brains produced similar electrical patterns in response to different odors.

Dr. Wilson said: ‘Our findings suggest that while olfactory impairment may reflect real damage to the sensory system, in some cases it may be a ‘use it or lose it’ phenomenon.’

He said this opened the door for potential smell training therapies that could help restore smell function in some cases.

Andrew McCombe, honorary secretary of the British Association of Otorhinolaryngologists ENT-UK, said there was good evidence that keeping mentally active was good for brain function.

However, he said training our sense of smell was only likely to be helpful in its long-term preservation.