The year 2011 was a disappointing year for world no. 2, Rafael Nadal but it does not stop him eying an Olympic gold for the London 2012 Olympics and fancies that he could win two Wimbledon singles’ finals in one glorious month.

Here’s Nadal’s plan for 2012 to achieve his dream: “To be better than ever; that’s what I’m going to try,” he says. “To be ready for 2012, which is going to be a big year for me, and to be a better player than I was in 2011. I want to be better at every moment.” You would expect no less a mission statement from the former world no.1 for three years after ceding the top spot to Novak Djokovic last year.

“Yes, two Wimbledons for me. Sure it’s possible to win both. Confidence is the most important thing in this sport and the confidence from winning Wimbledon would make it easier to win the Olympics too. Either would be very difficult, both even more, but the player who wins Wimbledon will be the favorite for the Olympics. It can happen,” declares the six times French titlist.

His candid thoughts about the Olympics: ‘You cannot put a price on Olympic gold,’ says Nadal. “To me, it’s special, different,” he says. “It’s true we have a fantastic tour, with all the facilities, all the money but the Olympics is the real spirit of sport.

“In the Games, you see a lot of sports that work really hard for that one event. It’s unbelievable; they are not winning money, they are just doing it for passion and for the personal satisfaction. And in my opinion that is what sport really is. It’s the spirit of sacrifice,” he says.

His goal for the future: “My goal is to be competitive in every tournament, to feel that when I go out on court I can beat everybody and that I’m ready to win the tournament.

“I was no. 1 before, for three years and for me it would make me more happy to win, for example, Wimbledon or the Australian Open, than to be No. 1. It’s a different feeling for me today; my priority now is, one, to be healthy and, two, to be a better player than I was last year. If, as a result, that gives me the No 1 spot back, then great but the important thing is to be competitive in the biggest events,” concludes Nadal. 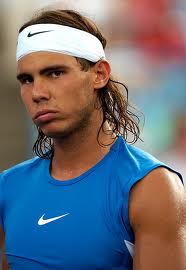