Rafael Nadal will clash with Novak Djokovic for the Madrid Open title after overcoming their respective opponents in the semis.

Djokovic is unbeaten in all 31 matches he has played this year, while Nadal has not lost on clay in two years.

According to Nadal it’s a very tough challenge for him playing Djokovic in the finals. The Serb last suffered defeat in London six months ago.

“I try not to think about losing,” said Djokovic afterwards. “I try to think about winning and I think that’s a positive state of mind. That’s why I’m playing well.”

Looking ahead to the final, Nadal said: “It’ll be a very, very tough match that I could lose even if I play well. He is coming here on a winning streak and that obviously gives you a confidence boost.” 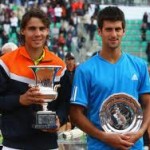