After overcoming their respective opponents in the semi-final, Rafael Nadal and Novak Djokovic will be meeting each other in the Italian Open final on Sunday.

Nadal overcame his tough first set against Richard Gasquet on Saturday before rolling to a 7-5, 6-1 semifinal victory while Djokovic was pushed to the limit in extending his unbeaten streak to 38 matches, defeating fourth-ranked Andy Murray 6-1, 3-6, 7-6 (2).

Nadal has a 31-1 record at the Foro Italico. Djokovic has won all 36 of his matches this year, 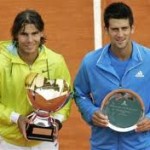