Lee Kuan Yew, the first prime minister of Singapore after its independence is one of the rare breed of Asian leaders who has transformed his country from a third world tiny state into one of the richest economy in the world.

In 1965, it was unthinkable for Lee Kuan Yew to succeed in his vision in developing Singapore because of rampant corruption proliferating within the bureaucratic government marred with inefficiency and red tape.

He has to overcome all of these and being newly independent nation with no resources except its people it remains uncertain at that time as to the political and economic future of Singapore.

For a leader to unify a nation with diverse cultural background of people is not that simple to do without political will and sheer determination from a morally upright leader like Lee Kuan Yew.

Lee Kuan Yew needs to do something extraordinary to realize that vision for Singapore by sidelining his political rivals and stifling freedom of expression for a time, and that was his best shot as he consolidated power.

After 25 years in power, we saw Singapore’s rapid rise from an underdeveloped trading state into one of the Asia’s wealthiest with a per capita income of US$ 48,000 as of 2010.

Among Mr. Lee Kuan Yew’s contemporary leaders in Asia were President Ferdinand Marcos of the Philippines and President Suharto of Indonesia. They both stayed in power for a long time.

Marcos stayed in power for 21 years (1965-86) while Suharto for 31 years (1967-1998). Both leaders ruled their country with authoritarianism, but none of them have come close as what Lee Kuan Yew has achieved for Singapore. 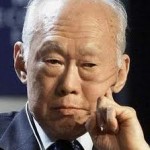