World no. 2 Rafael Nadal, beaten in the third round on the blue clay in Madrid, looked delighted to be back on the red court as he beat German Florian Mayer 6-1, 7-5.

Nadal won the first set on a double break, with a break for 6-5 in the second paving the way to the win.

The Spaniard earned his revenge against Mayer after losing to the German last autumn in Shanghai.

“It is an important victory,” Nadal said. “In the first set I played aggressively. Mayer put me in difficulty with his serve but I don’t think I ever suffered.”

Roger Federer’s last minute decision to compete was rewarded immediately as he defeated
Argentinian Carlos Berlocq in the second round 6-3, 6-4 .

Adjusting from the slippery blue clay in Madrid to the far slower red clay of the Foro Italico with ease, Federer conceded he had been unsure what to do up to the very last minute.

Federer was back on court just three days after winning the Madrid title on the controversial blue clay surface, an event where rivals Novak Djokovic and Nadal fell by the wayside, both of them fiercely critical of the slippery surface.

British number one Andy Murray faces France’s Richard Gasquet while Juan Martin Del Potro advances to the next round. 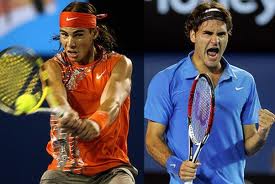