The voice analysis system was developed by the Speech Technology Center in Russia. The new system was designed in part by sampling Russian law enforcement databases of recorded voices of people found not telling the truth or those engaging in deceitful activities.

The bank involved, Sberbank, Russia’s biggest retail bank is testing something that the old Russian secret service might have wanted, an automated machine with a built in lie detector.

New customers could talk directly to the machine to apply for a credit card. The machine scans a passport, records fingerprints and takes a three dimensional scan for facial recognition.

And it uses voice analysis software to help assess whether the person is truthfully answering questions that include information relevant to any credit or loan transaction with the bank.

The software detects nervousness or emotional distress, possible indications that a credit applicant is disguising or involving in deceit. That information would be used in combination with other data, including credit history, according to Mr. Victor Orlovsky, a senior vice president for technology at the bank.

It was the global financial crisis that prompted Sberbank to tap Russia’s national security experts as it set out to automate banking activities, said Mr. Orlovsky.

Sberbank says that to comply with Russian privacy law, the bank plans to store customers’ voice prints on chips contained in their credit cards rather than on a central database.

In addition, Mr. Orlovsky said the bank planned to make customers aware of the types of information that the machine would be collecting, inclusive of their biometrics. The technology center says that even people familiar with the voice stress program, it would make them difficult to bungle the system.

“We are not violating a client’s privacy,” Mr. Orlovsky said. “We are just trying to find out if they are telling the truth.” 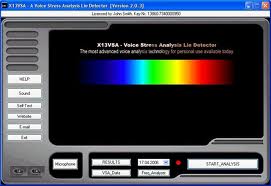