Crocodile ‘lechon’ or roasted crocodile is probably the first unique cuisine in the Philippines introduced by Philip Dizon, a businessman and owner of Davao Crocodile Park in Davao City.

Dizon prepared his crocodile ‘lechon’ debut last Sunday at his farm. The response was a hit because most of his visitors liked it.

Since then, his farm has been regularly receiving inquiries if they will be preparing more roasted crocodile for serving. With tremendous response from exotic foods aficionados, Dizon intends to prepare or sell roasted crocodile during special occasion.

According to Dizon, his reptiles are not endangered because they are being cultured in their vast crocodile farm along the diversion highway of Barangay Ma-a, in this city.

Aside the city being the home of the endangered Philippine eagle, it has added another feather to the cap in the tourism industry for its exotic cuisine, it has viewed to become another business hit in the food sector.

If the demand of his roasted crocodile warrants, Dizon is eyeing to source crocodiles from other farms nationwide with his farm producing about 200 hatchlings.

The Davao Crocodile Park does not only houses crocodiles but houses birds, snakes and monkeys as well. 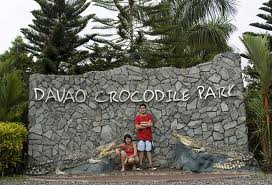