World no. 4, Roger Federer routs world no. 2, Rafael Nadal of what would be the former’s greatest victory over the latter.

It took Federer one hour to dispatch the Spaniard 6-3, 6-0 and assured to be the first player to make it through the Saturday semi-finals.

Nadal, who had an upset stomach during his three-set win over Mardy Fish on Sunday, said he had been unable to practice on Monday because of a shoulder problem that he thought might end his tournament but he said he was in ‘perfect’ condition against Federer.

Nadal emerges from what was their 26th official meeting still as the clear leader on 17 wins, but he has never suffered like this before against Federer, even when he took only five games from him at this same tournament four years ago. It was his worst defeat against anyone since January 2008.

“Today he played too good for me, and that’s what happened,” Nadal said. “Just accept that.”

‘That was a great match for me, playing well right from the start. I was able to do what I set out to do, to dominate from the baseline and take his time away,’ said Federer.

The 30-year-old Federer will play Fish in his final group match while Nadal will be playing the Frenchman Jo-Wilfried Tsonga on Thursday. 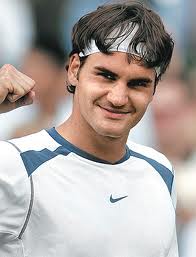