Roger Federer of Switzerland has slipped to number Four while Andy Murray of Britain went up to number 3 in the ATP world rankings.

The slip of Federer to fourth slot is due to Andy Murray’s win in the Shanghai Masters, his third straight ATP title triumph in Asia during the last month.

It is the first time Federer has been dropped from the top three places since July 2003, just before he won the first of his 16 Grand Slam titles at Wimbledon.

With Federer being sidelined due to an injury, Murray is well-placed as world number three for the first time in his career as the Scottish has few points to defend before the end of the season.

Rafael Nadal of Spain who won the French Open remains as number two while Novak Djokovic of Serbia who has won the Australian and US Opens as well as Wimbledon this year, is long way ahead at number one despite taking time off to rest a back injury. 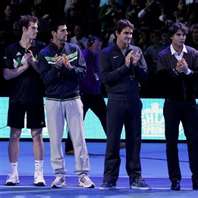