Under stress women are more likely to have baby girls than boys, experts say.
Prospective parents hoping to have a son and heir should just relax and worried women are less likely to give birth to baby boys as research suggests.

Experts say it could mean women being told to watch their stress levels as well as their diet and lifestyle when trying for a baby.

According to Dr. Cecilia Pyper, from the Department of Public Health at Oxford University, the research is addressed to healthy women in UK trying for a baby; this area is important to research because it needs to identify ways of making pregnancies and babies as healthy as possible.

Scientists who monitored women in the months before they became pregnant found that those who were suffering from long-term stress had more girls.

Those who had short-term anxieties also took longer to conceive.

It is the latest study to suggest that the circumstances in which babies are conceived, such as their parents’ diet and lifestyle, plays an important role in their development.

At the American Society of Reproductive Medicine’s annual conference in Orlando, Florida, 338 women from Britain who were trying to become pregnant were asked to keep daily journals about their lifestyles and their sex lives.

Their levels of two hormones known to rise with stress, cortisol and alpha-amylase, were also measured in the six months before they conceived.

Cortisol is linked to long-term stress such as money, work or health worries, while alpha-amylase levels can be triggered by a sudden release of adrenalin after a difficult journey or an argument, for instance.

Results for the 130 women in the group who went on to have babies were ‘indicative of a strong female excess,’ with 58 boys but 72 girls.

Normally in Western countries, 105 boys are born for every 100 girls.

Most strikingly, the odds of having a boy were 75 per cent lower among the women with the highest cortisol levels and 69 per cent lower in those with the second-highest levels. 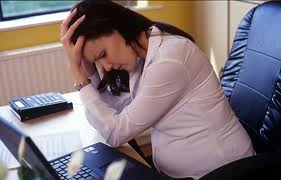