World no. 4, Roger Federer ended his almost a year wait for an ATP Tour title by trouncing Japanese hopeful Kei Nishikori 6-1, 6-3 in the final of the Swiss Indoors in Basle.

The Swiss tennis player won his home-town championship for the fifth time.
Nishikori pulled off a major upset by beating world number one Novak Djokovic in their semi-final, but the 21-year-old never looked likely to replicate that performance.

In Nishikori’s clash with the world no. 1 earlier, the Japanese was initially outclassed as Djokovic raced to a 5-1 lead, moving his opponent around the court with powerful ground strokes.

But later, Djokovic then lost his serve and called for a medical timeout to treat his right shoulder. Pains in the same shoulder had prompted his retirement in the Cincinnati Masters final in August against Andy Murray

Federer raced through the opening set and, while world no. 32 Nishikori had come from a set down against Djokovic, the Swiss never gave him a sniff of a comeback to close out the contest in one hour and 22 minutes.

Victory was Federer’s first title since he won the season-opening event in Doha back in January. 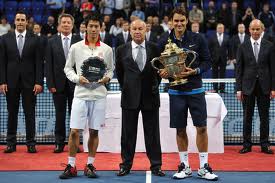