Several Saudi women openly drove their cars last Friday in defiance of an official ban on female drivers to drive.

Last month a Saudi woman was arrested and detained for driving because she drove the car without a driving license. In Saudi Arabia driving licenses are only issued to men.

The Secretary of State Hillary Clinton but all praise accorded to these women who are brave enough to impose their human rights to drive.

It was the first public comment of Mrs. Clinton on the issue. “What these women are doing is brave, and what they are seeking is right,” Mrs Clinton told reporters.

However, she underlined that she was not interfering in the internal affairs of Saudi Arabia, a key US ally in the Middle East.

Washington had so far opted for quiet diplomacy on the issue of Saudi women’s rights.
But with more Saudi women defying the driving ban and the call by activists for Mrs Clinton to speak out, it was no longer possible to stay silent.

The prohibition of women not to drive is not enforced by law, but is a religious edict imposed by conservative Muslim clerics in the country.

It is one of a number of severe restrictions on women in Saudi Arabia. 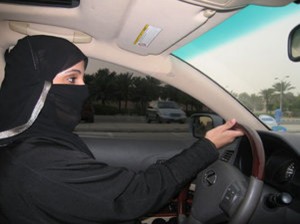