Shaquille O’Neal announces that he is retiring from the NBA after almost two decades playing with the professional league.

He made the declaration in a video he posted in his twitter account.
During his 19-year career, O’Neal has played for six teams; Orlando Magic, Los Angeles Lakers, Miami Heat, Phoenix, Cleveland and, most recently, Boston.

He has won four NBA titles – three with the Lakers and the last with Miami – and was named as the league’s Most Valuable Player in 2000. He has also been named NBA Finals MVP on three occasions.

He won a gold medal at the Atlanta Olympics in 1996, where he was a member of the US “Dream Team III”.

O’Neal has been marred with injuries in the latter stages of his career during his time with Phoenix Suns, Cleveland Cavaliers and Boston.

He decided to retire due to a lingering right Achilles problem in his leg which has been bothering him for sometime and that greatly affected his performance in the game. 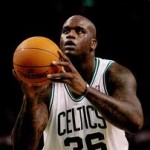