Shakira, the Colombian pop star was honored with a star on the Hollywood Walk of Fame joining the many other stars that adorn Hollywood Boulevard.

She was joined by her father William as her star, the 2,454th on the famous pavement, was unveiled in front of the W Hollywood Hotel and the presence of hundreds adoring fans.

Shakira, rose to fame and garnered international success with singles such as ‘No Creo’ and the Arab-inspired ‘Ojos Asi.’

The unveiling of her star came on the eve of another prestigious award for the singer, who will be honored as the Latin Grammy person of the year in Las Vegas.

The singer has won two Grammys and was nominated for her collaborations with Beyonce on the single ‘Beautiful Liar’ and Wyclef Jean on ‘Hips Don’t Lie.’

Shakira released her debut album Magia when she was just 13 years old. Her single ‘Whenever, Wherever,’ topped charts in many European counties and the Spanish version of the single won a Latin Grammy award.

She is the second most successful female Latin singer after Gloria Estefan, having sold over 60 million albums worldwide. 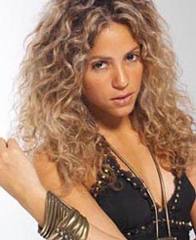