The wife re-wearing her original wedding dress to re-commit to her husband of 10 years.

The couple who announced their split last August but called it off in November, were surrounded by friends and family, including sons London, 9, and Cash, 5, as they exchanged vows.

Ferrar didn’t bother getting a new gown, instead, she modified her original Richard Tyler wedding dress.

She finished her look with a tiny white top hat complete with veil. She first wore the gown in 2001 when the couple married in Hawaii. 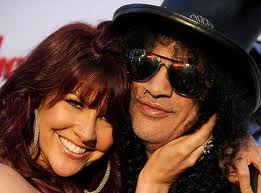