Earlier in the day, North Korea said it was going to make an important announcement at noon, keeping South Korean officials wondering what it would be.

South Korean intelligence apparently had no information about Kim Jong Il’s death two days ago until North Korea announced it.

According to the North’s TV broadcasts, the 69-year-old leader died of a heart attack Saturday during a train trip.

South Korean officials are under public and media fire for their apparent failure to collect credible intelligence on the sudden death of North Korean leader Kim Jong-il.

The lapse in intelligence on North Korea kept President Lee Myung-bak of South Korea in the dark until the North’s announcement, the sources said.

According to Seoul government sources, there was no inside intelligence that indicated the North’s announcement would be about the leader’s death.

When North Korea’s state television aired the news of Kim’s death, South Korean Defense Minister Kim Kwan-jin was in parliament briefing lawmakers on a defense reform bill. He rushed back to his ministry after being informed of the news.

The chairman of the Joint Chiefs of Staff was also on a tour of a front-line unit when the news broke out.

In May, the South Korean government also came under fire for failing to collect accurate information about the North Korean leader’s trip to China.

At that time, officials said that Kim’s heir-apparent son, Jong-un, was accompanying his father on the China trip, but he actually did not. 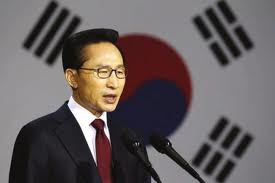