Spain has experienced with no rain since October of last year, the drought has affected the entire country.

It has suffered the worst drought in decades, with crops struggling to grow as farmers leave the land untilled.

The drought has also caused habitual summer forest fires to come early and they have already ravaged hundreds of hectares in the north.

Farmers in the Spanish region of Aragon alone which includes the provinces of Huesca, Teruel and Zaragoza will lose around US$ 1.7 billion dollars this season due to the lack of rain, according to farmers’ association Asociación Agraria de Jóvenes Agricultores (ASAJA).

The commission that regulates water used for irrigation in Aragon warned in December that the region’s reservoirs had only one quarter of the water needed for a ‘normal’ growing season.

The Sotonera reservoir, one of the biggest in the region, has dropped to 40 percent of its capacity.

The lack of rain has also pushed up production costs for farmers, which have outpaced any gains in prices for their crops and livestock.

Production costs for livestock growers have risen by 20 percent because the lack of grazing has forced them to buy expensive feed for their animals, according to Spain’s Union of Small Farmers (UPA).

“If there is no pasture, we don’t know where we are going to get grass or some other type of feed, and at what price,” said the 27-year-old farmer who usually takes his sheep to graze in lands near the town of Sarinena.

Montesa takes his sheep out to forage in mountains in northern Spain, he must bring water for them because streams near his town have run dry.

Fernando Regano, a farmer who is also from Sarinena in the province of Huesca, points to small, yellowing sprouts of barley and green peas which should be standing tall by this time but which have been stunted by the lack of rain.

“In this plot, if we had the 8,000 cubic meters of water I would for sure be able to raise 20 tons of barley and corn but I am going to have just four or five tons in the entire 70 hectare field,” he said.

Regano said he left 30 hectares of land uncultivated this year because of the lack of rain. He estimates farmers in the region will see drops in production this season of around 80 percent.

The previous three months December, January and February, have been the driest in Spain since at least the 1940s, according to the national weather office.

Authorities are already talking about subsidies for farmers hurt by the drought but according to Regano what is needed is good water control and new dams to better harness river water. 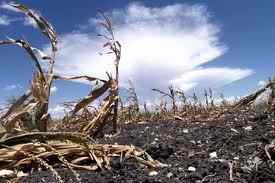