Tens of thousands of Spanish protesters are camping out at the Puerta del Sol square in Madrid and directly challenging the government’s initiated ban against them.

The protesters are not happy with the government’s economic policies and unfair politics that prevail in Spain which allow more than 100 people who are accused of corruption across the country to run for the next elections.

They are asking for a change in the political system.

According to them, as a people, they have no option but to vote for the two biggest parties in Spain, who according to them are more or less the same.

The politicians for both pro and con are unable to solve any problem, the system is just a nest of corruption.

The Spanish people are tired. What they wanted is a working democracy and a change of the system.

They want also an amendment of Spain’s electoral law that benefited only the big parties, leaving the small ones without any choice of achieving any success.

The protests are not really anti-government, but rather anti-big political parties, both in power and the other in opposition.

Instead of finding solutions, the big two parties, PP and PSOE, spend most of the time in political bickering and fighting with one another.

People of all ages feel the necessity to express their point of view in a different way than voting, as this traditional way has not had any effect in recent years

This movement of protesters is affiliated to no political party, it comprises of young people, old people, unemployed, civil servants, pensioners, immigrants, campaigners for local languages, freelancers, right-wingers and left-wingers all taking part

It’s a protest that wants a better, real future, not the future that the government or parties in opposition seem to be able to provide. 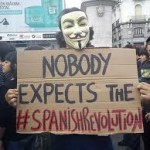 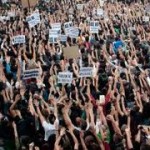