American golfer Steve Stricker becomes the first PGA Tour golf champion in 2012 when he carded a 69 on 23 under par to win the Tournament of Champions in Hawaii.

Scotland’s Martin Laird fired five birdies in his closing seven holes to finish second behind Stricker while Webb Simpson and Jonathan Byrd added pressure with 68s to tie for third.

Stricker, who dropped a shot at the short par-four sixth after opening with five pars, began to restore his advantage with a 24-foot birdie putt on the eighth before picking up another shot at the ninth with a tap-in.

“I felt it kind of slipping away (at the start of the round) but I was patient,” said the 44-year-old U.S. golfer.

“The birdie at eight calmed me down quite a bit and I played steady after that.”

South Korea’s KJ Choi and America’s Keegan Bradley, the only major champion at the tournament, recorded the joint lowest rounds of the day with eight-under-par 63s, to finish on 15 and 11 under par respectively.

The Final Leaderboard for the 2012 Tournament of Champions: 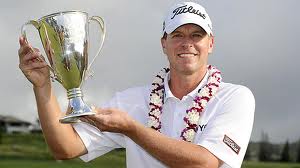