Brief exposure to UV light can cause mutations in the DNA of skin cells, including the host cells for melanoma. Sufficient of mutations can result to skin cancer.

Despite dermatologists’ repeated warnings, millions of people continue to abuse the ultraviolet rays (UV) that in small doses help maintain health but in larger doses can destroy it.

In a report by The Skin Cancer Foundation Journal, of the University of Washington in Seattle, it has emphasized hat continued purposeful exposure to a known cancer causing agent suggests that factors besides lack of knowledge are driving individuals to tan and tanners also report of mood enhancement, relaxation and socialization as their reason.

Hence, the incidence of skin cancer including potentially fatal melanoma continues to rise. This year, the 3.5 million new cases of skin cancers and an estimated 68,720 melanomas will be diagnosed among Americans.

“As we age the number of mutations increase and our immunity wanes,” said Richard Wagner, a dermatologist at the University of Texas Medical Branch in Galveston.

The widespread popularity and belief that people look better with tan has helped prosper the multibillion dollar indoor tanning industry.

An explanation, however, has emerged in which need scientific support, it is the idea of exposing one’s skin to UV radiation has addictive potential. There are enough UV abusers to warrant a new medical diagnostic category, tanning addiction.

Medical researchers have conducted two tests of substance abuse on 145 people at a local beach. One is a modified version of the test often used to root out alcohol addiction. The researchers noted that 26 percent of the beach goers met the criteria for addiction.

The second test, a modified version of the psychiatric profession’s official diagnostic criteria for a substance abuse disorder, 53 percent of the respondents scored positively.

A research by Dr. Steven Feldman and associates at Wake Forest University Baptist Medical Center in North Carolina has shown that frequent salon tanners experienced withdrawal symptoms after taking the drug naltrexone, which blocks the pleasurable effects of narcotics.

It has also reported symptoms of nausea, jitteriness when naltrexone blocked their endorphins. 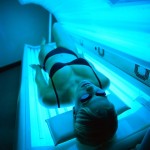