Thailand will be holding a general election on July 3 of this year,the government has announced.

This coming election will be the first electoral test for Prime Minister Abhisit Vejjajiva, whose coalition government came to power in 2008 after a court dissolved the then governing party.

It’s almost a year since violent anti-government protests in Bangkok occurred which has made the capital partially paralyzed.

In a recorded television message, Mr. Abhisit said the election would mark a new beginning for Thailand which remains to be politically divided.

He is seeking the direct popular mandate from the people which his critics say he currently lacks.

The polls will be the second held since the military ousted former leader Thaksin Shinawatra in a bloodless coup in 2006.

Mr Thaksin’s allies won the first post-coup polls in 2007 but the governing party and many of its lawmakers were subsequently banned from politics by court rulings.

Mr Abhisit’s coalition came to power in December 2008 via a parliamentary vote. This ignited tension among protestors which are known to be Thaksin allies, questioning Abhisit’s legitimacy to lead the government and demanding instead new election.

The protestors has disrupted parts of Bangkok , a 10-week saga that cost the lives of more than 90 people.

Mr Abhisit said in his television appearance that it was now time for the Thai people to decide: whether the people want to move forward, backward or in circles. 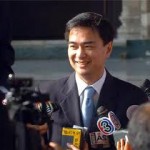