After protracted negotiations, WBA champion Haye and IBF and WBO holder Klitschko agreed to fight last month with the venue and date undecided.

But Boente confirmed the 57,000-capacity Imtech Arena in Germany would stage the unification bout.

The fight will be held on the 2nd of July in Hamburg and is confirmed 100 percent, according to Boente.

Adam Booth (Haye’s manager) and Bernd Boente discussed and made the decision together for the venue that they decided to go for Hamburg.

Booth was unavailable for comment but Haye left a message on his Twitter feed confirming the date and venue.

Haye was supposedly to fight Wladimir, 35, in 2009 but was forced to pull out because of a back injury and negotiations had repeatedly stalled since.
But the duo finally struck an agreement on 5 March.

Klitschko has been undergoing rehabilitation from an abdominal injury suffered in December – an injury which scuppered a planned fight with Haye’s fellow Brit Dereck Chisora – but Boente insisted the slightly later date was unconnected. 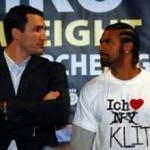