The biggest number of people recorded that were exposed to radiation, are the survivors of the Hiroshima and Nagasaki atomic bomb attack.

About 80,000 of the survivors have been carefully evaluated since the atomic bombing in 1945. Of this number, 126 have died of leukemia.

Aside from leukemia, a rise in stomach, lung and breast cancer are also noted from the survivors. It has provided evidence of the dose dependent relationship of cancer to radiation, the higher the dose received, the greater the risk of getting cancer.

Japan’s atomic bomb data shows that there is latency or delay between the radiation exposure and the death from cancer it causes.

The average latency for leukemia to develop is ten years while other forms of cancers to develop is twenty years from the time one has exposed to radiation.

The unit measurement of radiation is the rem (roentgen equivalent in man). It is the amount of radiation needed to produce damage to a living tissue.

The radiation exposure at 200 rems or higher, the losing of hair can quickly occur. Radiation kills nerve cells and small blood vessels, and can cause seizures and immediate death at 5,000 rems or greater.

At 100 rems radiation exposure , the blood’s lymphocyte cell count will be reduced, leaving the victim more susceptible to infection. The symptoms may persist for up to 10 years and may also have an increased long-term risk for leukemia and lymphoma.

At 1,000 to 5,000 rems radiation exposure, it would do immediate damage to small blood vessels and probably cause heart failure and death directly.

Radiation damage to the intestinal tract lining will cause nausea, bloody vomiting and diarrhea. This is occurs when the victim’s exposure is 200 rems or more and some radiation sickness victims will become sterile.

And in August 1996, from a radiotherapy department in a Costa Rican hospital where 17 cancer patients received an overdose up to 60 percent due to calibration error causing their death within three years. 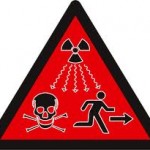