The dismal performance of Manny Paquiao in a trilogy with Juan Manuel Marquez might entice Floyd Mayweather Jr. to come forward and fight Pacquiao this time.

For Mayweather Jr. this must have been the right time to accept a mega fight with Pacquiao.

He must have seen the vulnerability of Pacquiao and it would give him at least a clearer picture now and a better approach in defeating Pacquiao in the ring.

The past performances of Pacquiao disposing the big guys withe ease seems to be unbelievable and defies boxing logic in Mayweather’s mind.

Not unless the smaller guy (Pacquiao) is under the influence of Performance Enhancing Drugs (PEDs) as what Mayweather Jr. suggests it can be possible for any fighter to excel his performance in boxing.

This is the reason why Mayweather Jr. demanded the blood testing Olympic style on fighters who wanted to fight him to take the test, to even the playing field and sees to it that both protagonists are free from PEDs.

So far two fighters had undergone the tests when they fought Mayweather Jr., Shane Mosley and Victor Ortiz.

Mayweather Jr. made it clear that any boxer who wanted to fight him has to take the test, including Pacquiao.

The hype announcement this month from the Mayweather’s camp to fight the ‘small fella’ on May 5, next year might turn into reality now they have found the Achilles of Pacquiao. 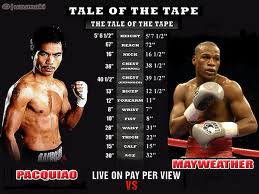