The euro fell below US$ 1.30 dollars for the first time since 12 January. Against the British pound, one euro bought 83.85 pence, while the pound was worth 1.19 euros.

The euro has fallen further against other major currencies as fears continue over the euro zone’s future.
Twenty six of the twenty seven members of the European Union backed new fiscal rules, with only the UK abstaining.

But many fear that the budget pact will still not be enough to prevent more countries from seeking a bailout.

Germany, whose debt is viewed by markets as the safest place within the euro zone to invest saw its borrowing costs fall further.

The costs of borrowing for euro zone countries continued to diverge. Italy’s government paid an interest rate of 6.47 percent to borrow 3 billion euros for five years at a bond auction, up from 6.3 percent last month.

At an auction of 5 billion euros’ worth of two-year bonds, the yield was 0.29 percent, down from 0.39 percent last month.

European stock markets were in negative territory. London’s FTSE 100 and Frankfurt’s Dax were both down about 1 percent by lunchtime, with the Paris Cac 40 index trading 1.76 percent lower. 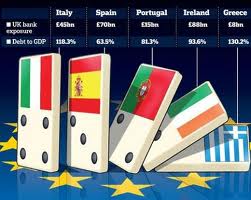