Natural dye producing plants which have high extractives have long been known already to exist in the natural forests in the Philippines.

These indigenous plants which are sources of food coloring, dyes, tannins and printing pigments are waiting for their development and they offer as alternatives to the imported synthetic dyes which the country is importing annually.

By utilizing these dye yielding plants which abound in natural forests, the country can save as much as US$ 20 million dollars annually from synthetic dye importation.

In the field of food preparation the use of natural food coloring extracted from plants like achuete could spell the difference when it comes to taste and health.

Synthetic dye as we know has been discovered detrimental to human health due to their carcinogenic properties and thus the need to substitute this synthetic food colorings with those of natural origin like plants is highly recommended.

The achuete also known as annatto (Bixa orellana L.) is one plant which has a high potential as a coloring pigment in food preparation. It has also a good potential applications to the pharmaceutical and cosmetic industries which produce health related goods.

Latin American countries are the major suppliers of achuete in the international markets. Asian countries including the Philippines contribute only around 14 percent of the total market.

Importing countries require a bixin content of 2.7 percent or more. Bixin is the coloring pigment found in the achuete seeds . It is substantially used in the manufacture of cheese and butter, dressings, snacks and other confectioneries.

Its demand and application in the various industries are distributed as follows: Cheese making 50 percent; fish processing and feed manufacturing 20 percent; confectionery 0.05 percent; and other uses of dye products other than cheese and snacks 20 percent.

In Northern Luzon particularly in Abra and La Union, the hand loom weavers also use achuete seeds to color their fabric products.

Although achuete is more popularly used as food coloring, the Forest Products Research and Development Institute in College, Laguna, has reported the potential of achuete for staining wood products like furniture which can be comparable to commercial wood stains.

Philippine achuete seeds are found to possess high potential for export especially the white flower bearing variety which has the highest bixin yield of 2.59 percent.

To improve bixin yield in accordance to importing countries’ requirements, it has to improve the following: the packaging, transportation and its drying methods which have contributed to the loss of bixin content.

Polyethylene bags are found suitable in handling and storage. Using these bags resulted in the retention of bixin content up to 4 months at ambient temperatures of 28 to 32 degrees Celsius. 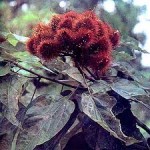 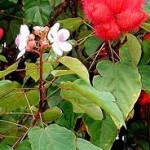