Floyd Mayweather’s announcement that he does not need Manny Pacquiao right after he wins the fight with Victor Ortiz is understandable.

Recently, he just earn millions of dollars by defeating Ortiz, in a controversial bizarre knockout punches of the night.

As long as he is earning lucratively by choosing whom he wants to fight with less risk he will continue to subscribe to such idea. Who needs Pacquiao anyway when the risk of defeat is high? It is simple as that.

Mayweather’s declaration that he doesn’t need Pacquiao does not come as a surprise to most boxing enthusiast especially if it is coming from Mayweather Jr. whose state of mind is unstable and he has always been contradicting himself every time.

His eccentric demands of blood testing Olympic style is one example which is beyond the rules set by any Athletic Sports Commission for professional boxing in any state of America. It is not only unwarranted but it is without any legal basis.

Instead of formally petitioning it to the concerned Athletic Sports Commission or to a Court of law for that matter to address his demand, he prefers to bring it out to media’s attention to insinuate that Pacquiao is using PEDs.

But recently he’s again contradicting himself to the media that he was not saying anything that Pacquiao is using PEDs.

As a psychological coward at that, he is still not ready to face Pacquiao despite his controversial win over his cherry picked and inexperienced opponent Ortiz.

In refusing to commit an engagement with Pacquiao is perhaps the safest thing he can do for the moment, perhaps he is waiting for the trilogy outcome if how Pacquiao can convincingly defeat Marquez this time.

If Pacquiao knocks out Juan Manuel Marquez cold just like what Pacquiao did to Ricky Hatton, the probability that a Pacquiao – Mayweather Jr. fight is doomed not to happen for good. And if ever it goes the other way around and the fight goes the distance, maybe and maybe Mayweather would take the chance of fighting Pacquiao.

In Pacquiao’s case, he has said it publicly that if Mayweather Jr. is ready to fight him, he is just waiting for him and always open to him anytime and anywhere. And if that happens Pacquiao has vowed to himself that in the ring with Mayweather jr. he will fight him to the teeth as if there’s no tomorrow.

Let’s wait what happens next after November 12. 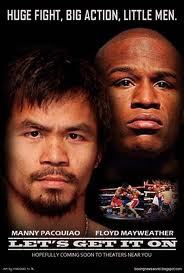 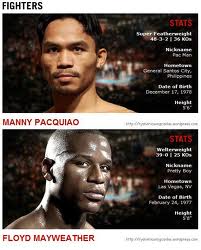