Let bygones be bygones as Keith Richards apologized to Mick Jagger for derogatory comments he made for the latter in his published autobiography ‘Life’.

Fans will be relieved to see the two rock’n’roll veterans agreed it was time for them to move on and put an end on their petty differences.

According to Keith “As far as the book goes, it was my story and it was very raw, as I meant it to be, but I know that some parts of it and some of the publicity really offended Mick and I regret that.”

Mick retorted, “Looking back at any career you are bound to recall both the highs and the lows,” Jagger was quoted as saying. “In the 1980s for instance Keith and I were not communicating very well.

“I got very involved with the business side of the Stones, mainly because I felt no one else was interested, but it’s plain now from the book that Keith felt excluded, which is a pity. Time I reckon to move on.”

The Rolling Stones have plans to celebrate its 50th anniversary this year and to go on another world tour.

The eagerly anticipated world tour by one of the world’s biggest music acts is now not expected to happen until 2013 at the earliest, according to the Rolling Stones magazine.

The delay of their planned tour is more closely linked to concerns over Richards’ health.

“The quality of the guitarist’s performances declined after he suffered a head injury on vacation in Fiji in April 2006, midway through the Bigger Bang tour,” the magazine said. 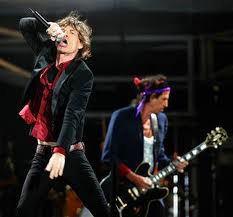