With the rising petrol prices, the US government is planning to utilize its its emergency oil reserves to protect the growth of the American economy.

The reserves could only be tapped as a government policy in the event if there are impending considerable fuel supply shortage that can directly affect domestic oil prices like outages in Libya and the concerned political unrest in the Middle East.

Though the move is done in a very rare occasion it is something that the Obama administration is compelled to, to neutralize any fuel price increase in the local market.

The national average for a gallon of self-serve, regular gas was $3.50 on March 4, according to the influential Lundberg Survey of about 2,500 gas stations, up 32.7 cents from the February 18 prices.

The Obama administration is pressured by the US Congress to consider emergency supplies as an option to ease consumers’ fears over increasing fuel prices, already nearing at the $4.11 per gallon level, a repeat of gasoline price in 2008, according to the Lundberg Survey.

The U.S. Strategic Petroleum Reserve holds 727 million barrels of oil, or about 38 days of consumption, and has only been tapped a handful of times since it was created in the mid-1970s after the Arab oil embargo. It was last used in 2005 following Hurricane Katrina.

Higher oil prices could undermine the fragile U.S. economic recovery and damage President Barack Obama politically as he moves toward a 2012 re-election bid. 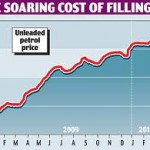