Tiger Woods, who aims for his 15th major at Lytham, insists that the course is ‘fair’ and that good scores are still possible.

The former world number one has already talked about some of the rough being ‘almost unplayable in places’, and he has also experienced it now in different winds.

The three times British Open champion believes the Royal Lytham rough is the toughest he has ever faced as he prepares for the tournament.

‘I think that if I continue putting myself there enough times then I’ll win major championships,’ said Woods.

The 14-majors title holder is back at the course where he finished 22nd in 1996, shooting three under par to equal the record for the lowest total ever by an amateur in the championship.

The 36-year-old admitted though that the potential round-wrecking consequences of straying from the fairway, combined with forecast showers on Thursday, could prompt him to go on attack.

Defending British Open champion Darren Clarke described the rough at Royal Lytham as ‘brutal’, adding: ‘If you start spraying the ball around this week, you might as well go home.’

Royal Lytham professional Eddie Birchenough admitted that the rough on the championship course was ‘just brutal’, warning ‘you could lose your feet in there, not just the ball.’

Clarke believes the difficult Royal Lytham test could boost his chances for this week’s Open.

Woods, who could go back to world No. 1 with victory in The British Open at Royal Lytham, insists that he is neither anxious nor impatient about ending his long wait for another major. 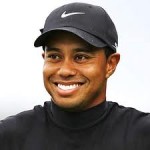