One in every five American youths aged 12 and older suffer hearing loss enough to interfere effective communication on a daily basis.

The researchers looked specifically at people age 12 and older, men and women of all races, whose hearing had been tested during National Health and Nutritional Examination Surveys (NHANES) exams.

According to Dr. Frank Lin, assistant professor in the department of otolaryngology at Johns Hopkins School of Medicine and lead author of the study. “Hearing loss has a great impact on cognitive abilities and can progressively lead to social isolation and loneliness.”

“When people can’t communicate effectively, the brain actually has to reallocate resources to help with hearing, and that may affect dementia and other cognitive impairment,” said Lin.

World Health Organization’s definition of hearing loss is unable to hear sounds of 25 decibels or less in the speech frequencies.

While hearing loss nearly doubles with every age decade, women and blacks were significantly less likely to suffer from substantial hearing loss at any age than were men, whites and Hispanics.

Experts said estrogen and melanin in darker skin could both have protective effects on the ear, which may explain the lower rates of hearing loss in such populations.

According to Dr. Rob Jackler, chairman of the American Academy Otolaryngology Hearing committee and a professor at Stanford University School of Medicine, that ringing or hollow sound in one’s ear after listening to a steady stream of loud noise is known as a temporary threshold shift.

That shift is a ‘red flag’ for causing potential permanent damage, said Jackler, especially if the ringing lasts more than a few hours. Impulse noise is even worse than the temporary threshold, though.

“The ear has a defense mechanism that mitigates slightly continuous sounds. There are little muscles that tighten to resist sound, which allows for a minor degree of protection, but impulse noises get in before the ear has time to defend itself,” said Jackler. 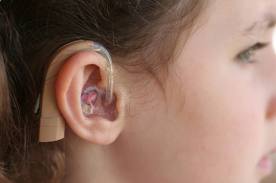