As part of Tiger Woods’ divorce settlement, with his ex-wife Elin Nordegren, she kept the Isleworth home, while Woods retained the Jupiter property, which he purchased and began working on in 2006.

Jupiter is about 155 miles (250km) southeast of Isleworth.

Ahead of his upcoming move, Woods has designed and overseen construction of a short-game practice facility to work on his golf game at his new home in Jupiter, Florida where he would reside.

“It features four greens, six bunkers with different depths and kinds of sand, a video center and a putting studio,” Woods said. “If no wind is blowing, the longest club I can hit is a 7-iron. It’s also set up so I can hit shots out of my second-story studio.”

Woods has not won a title since returning to golf after a five-month hiatus at last year’s Masters. He needs all the help to get back and keep track where it was when he was no. 1.

He’s now working with his coach Sean Foley on some changes and fine tuning on his swing motion.

My swing is still a work in progress and it takes time to get comfortable with everything,” Woods said. “It’s hard to implement all these changes. I just have to keep moving forward.

“I’m light years ahead of where I was at the end of last summer. The biggest thing is understanding what shot to hit and how to adjust my ball flight. Thanks to Sean Foley, I have a much deeper understanding of how to do this than ever before.”

The next chance for Woods to end his drought will be this week at the $8.5 million World Golf Championships (Cadillac Championship) at Doral, Florida. 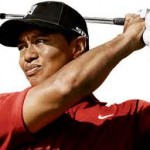