The African lions are declining in an alarming rate over the past twenty years. The number of African lion’s population has dwindled to almost 50 percent by retaliatory killings, loss of habitat and prey species, exploitation by recreational trophy hunters and commercial trade, disease, and other factors.

Wildlife groups filed a petition with the Department of Interior last (March 1) seeking the protection for African lions in the United States under the Endangered Species Act (ESA). The move is needed to stop the import of lion parts that were hunted as trophies, the groups said in a statement.

“There is a real possibility that more African countries will lose their wild lions altogether if the current situation is not reversed,” Adam Roberts of the wildlife group Born Free USA said in a statement. “Currently, lions are not adequately protected by existing regulatory measures at national, regional or international levels.”

“The United States is the leading importer of lions and lion parts for commercial and recreational trade — this includes skulls, claws, hides and live lions,” said Teresa Telecky of the Humane Society of the United States. “Americans’ thirst for exotic goods and trophies to hang on their walls is driving lions to extinction.”

The secretary of the interior has 3 months to assess whether an endangered listing under the ESA may be warranted, 12 months to decide whether to propose listing and another 12 months to make a final decision. 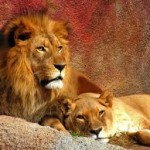