Former world no. 1, Tiger Woods fires a 69 to share second place with fellow American golfer behind leader KJ Choi of South Korea who carded a 66 to open a 3 shot lead.

Woods made a strong start to his bid for a fifth Chevron World Challenge title in California.

The American who has won this event four times is tied to second place in the 18-player field, alongside his fellow American golfer Steve Stricker.

Woods is without a tournament victory for two years and lost a play-off to Northern Ireland’s Graeme McDowell in this event 12 months ago.

However, he came into this week on a positive note having helped the United States to win the Presidents Cup after finishing third in the Australian Open last month.

Woods birdied the first, second, fourth and fifth, but dropped a shot on the ninth to reach the turn in 33, three under par.

He picked up further shots at the 13th and 17th on the way home, but bogeys at 15 and 16 meant there was no overall gain on the closing nine holes.

Woods also opened brightly, racing to four under par after five holes. A dropped shot on the ninth was regained on the 13th but consecutive bogeys on the 15th and 16th threatened to derail his round.

However, he drained a 15-foot putt on the 17th and two-putted for par on the last to remain firmly in contention. 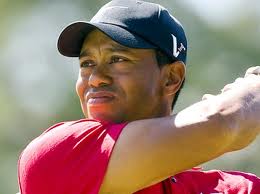