The former world number one is three shots behind the opening round leader, Adam Scott of Australia who fires a six under 64 the lowest score of the day.

He opened with a 14-foot birdie putt, holed from even further away at the fourth and sixth and then chipped dead on the long next.

The one dropped shot came at the 462-yard 15th, and threatened to be even worse when he moved his ball from deep rough into even nastier stuff.

From there, however, Woods muscled the ball on to the green and escaped with a five.
‘I hit the ball well all day. I was just lacking a little bit of pace on the greens coming home,’ said Woods, who has a chance to return to world No 1 ranking this weekend.

Woods was paired with European stars Justin Rose and Sergio Garcia, both yet to open their major account, and easily out-played them.

Garcia shot a 72 that included a double bogey on the third, Rose a 74 in which his only birdie was at the 355-yard 13th. It was the fourth time at The Open that Woods and Rose have been playing partners in the first two rounds. 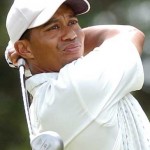