The National Climatic Data Center reported that this year’s drought is the most widespread since 1956.

US Agriculture Secretary Tom Vilsack has warned the worst drought in decades will result in higher crop prices.

The United States is the world’s biggest producer of corn and soybeans, and the warning came as some farmers warned they may be forced to harvest crops early to sell the stalks off cheaply as animal feed.

Vilsack revealed that 78 percent of US corn and 11 percent of soybean crops had been hit, and compared the situation to a 1988 drought that cut production by 20 percent and cost the economy tens of billions of dollars.

Secretary Vilsack met President Barack Obama on Wednesday to discuss the US response to drought concerns, with little rain forecast to ease the crisis.

This summer, 80 percent of the US is abnormally dry, and the report said the drought expanded in the West, Great Plains and Midwest last month with the 14th warmest and 10th driest June on record.

The secretary said the government had increased the number of territories designated as drought disaster zones, bringing the total to 1,297 counties in 29 states, where farmers will be eligible for assistance.

Vilsack said Obama had ordered that the interest rates on emergency loans for farmers be reduced and that emergency areas be opened up for livestock grazing and hay production as feed costs rise.

But he said consumer food prices should not rise immediately, since the costs from the farm door are a small proportion of a final supermarket bill, and in any case it will take a while for the crisis to reach store shelves.

The World Bank said that while it was ‘too early to be overly concerned’ over the drought’s impact on corn and soybeans, it was “monitoring the situation closely for potential impact on our clients”.

Mark Svoboda of the National Drought Mitigation Center in Lincoln, Nebraska said the drought was as tough as the worst in the 1930s and 1950s.

The timing has been particularly devastating, coming just at the peak of the growing season with the epicenter the central US farm belt east of the Rocky Mountains all the way to the Atlantic coast. 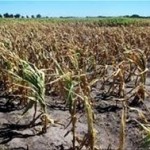