American Jason Dufner and Korean Charlie Wi were the opening leaders with six-under-par rounds of 66 in the Arnold Palmer Invitational first round here at Bay Hill.

Former world no. 1, Tiger Woods who succumbed an ankle injury from his last PGA Tour event at Doral carded with a three-under-par 69 trailing opening leaders by three.

Alongside Woods after also shooting a 69 was Justin Rose. The last time they played in the same tournament was the WGC-Cadillac Championship in Florida where Justin Rose walked off with the trophy and Tiger Woods limped off with a left leg injury.

Woods, a six-time winner of the title, dropped only one shot when he three-putted the short 17th. From there he will draw a lot of confidence from a round that was four strokes better than that of long-time rival Phil Mickelson.

The 14 majors champion declared, “I’m in a position where I can hit it again. That’s something that’s been missing for a while and it’s all the work that Sean (coach Sean Foley) and I have put together.”

Another win for Rose would take him to a career-high fourth in the world behind Luke Donald, Rory McIlroy and Lee Westwood. 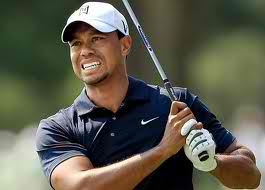