Some people using electric car seem not worried about running of power because of reliability and availability of recharging stations at work within their vicinity.

However, for most other people, however, it remains a challenge to find electric charging stations to refuel.

As a result sales of electric cars have been left behind, with most consumers going for hybrid options that at least offer the possibility of running on fossil fuel.

But with interest in going green growing among consumers, and with tougher emissions standards to kick in from 2013 across the European Union, companies are beginning to introduce new solutions.

Swiss company, Green Motion, exhibited several types of chargers at the show, ranging from a portable gadget that weighs just 6 kilograms (13 pounds) to a 210 kilogram installation which looks much like a petrol pump.

“People will want to charge at home,” a spokeswoman for the firm said, as she showcased the portable version.

Another Swiss firm, Alpiq E-Mobility AG, announced an agreement with Toyota to fit charging infrastructure at its 250 dealers across Switzerland.

In addition, it will also offer a charging station to go with each of Toyota’s best-selling hybrid car Prius.

It is an “an important step towards establishing e-mobility in our country,” said Alpiq managing director Peter Arnet.

“Electricity is the way to go in the future especially if we want to have zero emission vehicles,” declared Chevrolet Europe’s president Susan Doherty who drives to work in an electric car daily. 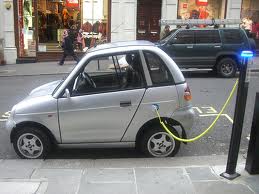