The Department of Agriculture (DA), has reported, the recent two successive powerful typhoons that run havoc to Luzon for a week have damaged agricultural crops amounting to Php 7 billion pesos (US$ 163 million dollars).

The two typhoons named ‘Pedring’ and ‘Quiel’ respectively had brought massive floods and devastation to agricultural crops. It has affected the farmers in 25 provinces with 38 percent of the total harvest area of 878, 545 hectares were damaged.

The rice sub-sector was the hardest hit with an estimated 333,502 hectares or 448,469 metric tons of palay (unhusked rice) damaged by the typhoons.

Around 21,481 hectares planted to corn, or 34,839 metric tons of corn amounting to P403 million, were also damaged. The volume represents 2.25 percent of the target corn production of 1.5 million in the last quarter of 2011.

For livestock, losses of animals were valued at Php 2.2 million.

Agriculture officials, however, gave assurances that the country has sufficient rice supply.

Officials said that a rice shortage is unlikely since other rice-producing provinces were able to harvest their grains.

The DA said they withdrew a part of buffer stocks from other regions to augment the temporary shortage of supply in Central Luzon. 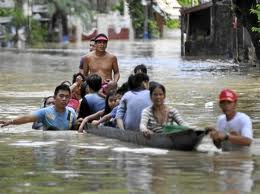