Annually up to 200,000 people die of heart disease and stroke in the UK alone but if everyone over the age of 50 would take the polypill that number could be more than halved, according to scientists.

In a trial that was conducted over three months, the polypill was found to cut blood pressure by 12 per cent and lower levels of ‘bad’ cholesterol by 39 per cent.

The principal investigator on the trial, was Professor Sir Nicholas Wald, who proposed the polypill in an article in the British Medical Journal eight years ago.

The version of the polypill that they tested, contained the blood pressure drugs amlodipine, losartan and hydrochlorothiazide together with cholesterol-lowering simvastatin. Aspirin, included in earlier formulations, has been dropped because it can cause stomach bleeds.

A group of 84 men and women aged 50 and over were randomly given the polypill or an inactive ‘dummy’ tablet for a period of three months.

They then switched treatments for another three months so the effects of both were seen in each patient. The results are published in the journal PLoS One.

Professor Wald said if people took the polypill from age 50 a significant number would benefit by preventing a heart attack or stroke during their lifetime.

“Not all of them will be prevented, but a large proportion will be. It will have a big impact.”

Statins have for years been prescribed to people deemed at high risk of heart attack or stroke, but who have never had one. So too have blood pressure lowering drugs.

But many struggle to take both daily, reducing their overall effectiveness. The idea behind the polypill is to make the whole process of preventive medicine much easier.

Dr. David Wald, the cardiologist who led the research and the son of Professor Sir Nicholas Wald, who came up with the polypill concept, explained: “The health implications of our results are large. If people took the polypill from age 50, an estimated 28 percent would benefit by avoiding or delaying a heart attack or stroke during their lifetime,” he said.

“On average, those who benefit would gain 11 years of life without a heart attack or stroke.”

For some people, that would mean potentially fatal heart attacks and strokes being delayed by that length of time, he said.

The British Heart Foundation’s senior cardiac nurse, Natasha Stewart, said: “However interesting this potential new pill is, medicines are not a substitute for living a healthy lifestyle. Staying active, eating healthily and not smoking are still vital ways to help keep your heart in good shape.”

Dr. Margaret McCartney, a Glasgow GP whose book ‘The Patient Paradox’ asks why doctors end up screening healthy people rather than treating sick ones, said more evidence was needed before a mass program was embarked upon.

“We also have increasing evidence that well women, for example, don’t benefit from statins – meaning that we may only be offering them side effects and while muscle aches might seem like a minor side effect, if it stops someone walking or socializing it becomes major.

“We need much larger trials that gives us fair representations of risk and harm, and that’s independent, separate from patent holders.”

Prof. Wald is a patent holder for this version of the polypill. 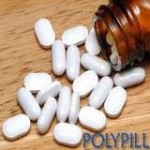