There are weight loss supplements available in the market today that take in the form of slimming or dieter’s tea and seemed to be effective and yet what is not seen is its effect when taken in the long term.

One of the effects of drinking dieter’s or slimming tea is frequent bowel movement. This gives people the impression that body cleansing is going on in their system, excreting the toxins out from their body.

However, the reason behind why it induced frequent bowel movement because slimming or dieter’s tea contains herbs which are natural laxatives. These include aloe, senna, rhubarb root, cascara, buck thorn and castor oil.

These are products which are derived from plants and are used since the ancient times because of their potency in treating constipation and to inducing bowel movement.

Cascara, castor oil and senna are substances which are recognized as laxatives available over the counter and are also regulated like drugs. Scientific studies show that diarrhea induced by laxatives does not absorb significant amounts of calories taken in the body.

The reason for this is that laxatives do not act on the small intestines where most of the calories are absorbed. Instead, they work on the large intestines.

If taken in large amounts for prolonged periods, it can affect fat absorption of the body. This may lead to greasy diarrhea and loss of weight. Abuse of laxatives is common practice among people who suffer from bulimia and anorexia nervosa.

While weight loss can be guaranteed by overdosing on laxatives, it may also cause permanent damage to the gastrointestinal tract and the weakening and softening of the bones, a condition known as osteomalacia.

Drinkers of slimming or dieter’s tea may actually patronize the product because they are less expensive and taste better than other laxatives sold in the market. Other people, such as those with eating disorders like bulimia and anorexia nervosa drink slimming or dieter’s tea because they work fast and produce watery stool and having loose consistency.

Women may even be more susceptible to the effects of slimming or dieter’s tea. Although they may be not known to interfere directly with the woman’s menstrual cycle and fertility, they should watch out if drinking them causes them to rapidly shed off weight.

It is also not safe for pregnant women to be taking in laxatives of any kind. Wise and responsible herbalists also discourage the use of senna and other herbal products with laxative properties for pregnant women and women who are trying to conceive.

One should be wary about these findings because the labeling of slimming teas in the market today can be absolutely misleading. For instance, they commonly refer to the laxative qualities as “natural bowel cleansing properties” and not specifically use the word “laxative”.

Some even use the term “low-calorie” on their labeling. These products in fact, contain essentially no calories nor nutrients whatsoever; unless of course, if they are sweetened.

Adverse effects of misusing laxatives in the form of slimming tea generally occur when taken in more than or longer than recommended. These include nausea, stomach cramps, vomiting, diarrhea, fainting, rectal bleeding,electrolyte disorder and dehydration as well as injury and worse, death.

It was also reported that excess use of stimulant laxatives cause severe constipation and pain for long periods (as much as for decades) due to the colon losing its function. It eventually led to surgery removing the colon altogether. 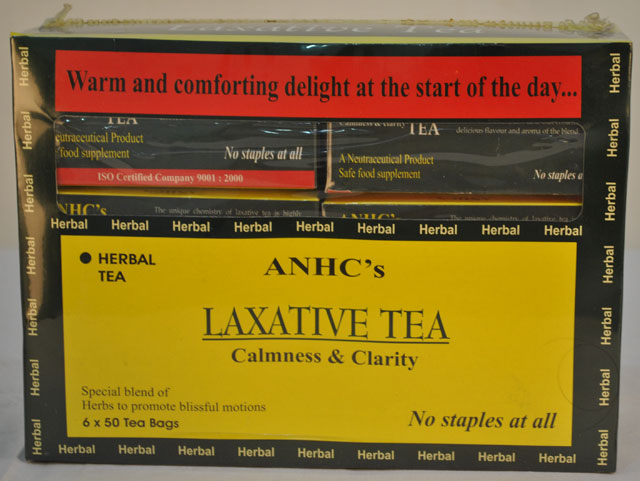