Floyd Mayweather Jr. knows too much about boxing that he would not engage any fighter whom he knows surely would endanger his legacy that could hand in his first defeat.

He is fascinated of being undefeated which is his yardstick to greatness. That’s the reason why he avoided or ducked fighters if his chances of winning is slim.

To him being undefeated is a science by itself. It is a science of how to cherry pick an opponent properly and how to carefully determine that your opponent is no longer at his prime. If these two premises are addressed to, that’s the time Mayweather jr. decides to fight thus protecting his cherished zero loss record legacy.

It was obvious from the start why he has ducked Miguel Cotto, Antonio Margarito and Shane Mosley in the past when they were at their primes. He loves the opportunity to fight when he has the advantage either when his opponent is inexperienced like the Victor Ortiz fight, his opponent is washed up and its career declining.

He enticed Marquez to fight him at contracted weight of 145 lbs but come up 2 lbs heavier at the scale.

The added weight actually gives leverage to Mayweather’s heavy frame against Marquez’s lighter frame. The extra baggage costs Mayweather US$ 600,000 from his purse. As long Mayweather has that upper-hand he is willing to pay the price.

The intention of Mayweather jr. why he fights Marquez is to humiliate Pacquiao that he is a better boxer than him in terms of skill and ring IQ. He wanted to show to the world that boxing is not all about brawling and slugging it out with an opponent but it’s more than that, it’s about winning the fight conclusively in the 3 judges scorecards and that’s what the pure science of boxing is all about and Mayweather has mastered the craft and taught some lessons to Marquez in their fight that ended the bout in a unanimous decision in Mayweather’s favor.

To boxing purists this is the way they gauge the skill of the best boxer in the discipline. Even how boring the pure science is they don’t give attention if it has entertained the audience or not.

However, to ordinary fans and majority of boxing supporters this is not their criteria of their layman’s version of boxing. What they wanted to see is total entertainment package in boxing to commensurate for what they pay for.

Since this is a prizefighting event they expected the explosiveness and excitement of street fighting that the fighters could bring into the ring.

What they wanted is a fighter who does not backtrack or run around the ring but willing to tag along and engage with his opponent at will, a boxer that could deliver his all and yet give total entertainment to the audience.

Since Pacquiao’s boxing debut in the U.S. soil, he has been known to be an explosive and spectacular fighter at that because of his no let up offensive style in the ring and he always go for the kill against his opponents that brought both boxing fans and aficionados sweep into their feet with awe and surprises.

The total entertainment aspect that a fighter could bring in the ring suits Pacquiao’s persona a complete opposite to that of Mayweather.

Their fighting styles and personality are in the opposite sides of the pole and they are both experts in their own respective crafts.

There’s an old adage that says “your best offense is your best defense. This fight is a war between offense against defense.

If Mayweather put up his defense against Pacquiao like a Joshua Clottey or Omar Narvaez, he will never win the fight.

If Mayweather put up his defense and offense like he fought Marquez, he has a slight chance of winning the fight against Pacquiao in judges’ scorecards.

If Mayweather slugs it out with Pacquiao the way he fought Mosley, he will never have a chance with Pacquiao.

If Mayweather choose to hit and run and not allow himself to be touched by Pacquiao chances that he may win the fight.

Hence, the ball is round who ever really wins. This author see an even pit up for the two elite fighters.

The possibility is rife that the first Pacquiao-Mayweather fight, could end up a draw that eventually needs a rematch. How is that? 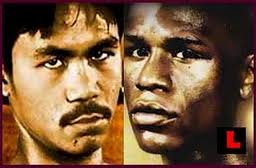