A new book, ‘Mick: The Wild Life and Mad Genius of Jagger,’ claims Her Majesty Queen Elizabeth‘did not have the stomach’ to hand the award to the singer in 2003 on account of his anti-establishment views.

Besides, the Queen also disliked the Rolling Stones star’s relationship with her sister, the late Princess Margaret, and thought he was using her to climb the social ladder.

So she asked Prince Charles to give Jagger the knighthood instead, according to claims in the new book.

Jagger once referred to her as ‘chief witch’, that’s the reason why the Queen obviously avoided giving Mick Jagger his knighthood in person because she thought he was an inappropriate candidate for the title.

The Queen saw Jagger as unpatriotic having moved to France as a tax exile in the 1970s and embodied the sex, drugs and rock and roll ethos of the 1960s ‘more than any other figure’.

The biggest problem however was the Queen’s feeling that Jagger was a ‘corrupting influence’ on her sister, the late Princess Margaret, with whom he was known to socialize on the Caribbean island of Mustique.

The new book authored by Christopher Andersen writes that the Queen deliberately scheduled an operation to remove cartilage from her left knee for the day before Jagger received one of the highest honors in the land.

Andersen claims that there was anxiety that she was ‘emotionally fragile’ and that Jagger was using her to further his own end.

Tony Blair, during his tenure as Prime Minister repeatedly tried to add Jagger’s name to the Honors List but was rebuked by the Queen because he was ‘not suitable’.

When Jagger was finally added, Andersen quotes an anonymous Royal courtier as saying: ‘The Queen looked at Mick Jagger’s name on that list, and there was absolutely no way in the world that she was going to take part in that.

‘So she simply arranged to be elsewhere’.

Jagger is said to have postponed the date of the ceremony 10 times but on December 13, 2003 he eventually accepted his honor, but the Queen was not there to give it to him in person.

At a Prince’s Trust dinner in 1991, Jagger was also photographed with one hand in his pocket as he shook Charles’ hand, a breach of Royal protocol.

After hearing about Jagger’s knighthood, Charles is supposed to have said a Commander of British Empire (CBE) was more appropriate, shaken his head and told aides: ‘It’s really quite difficult to believe. A knighthood. Just incredible.’ 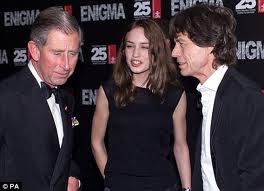