Following an incidence in smuggling of the orange-spotted Tokay Gecko mainly for medicine in China, wildlife activists urge that the said lizard be protected under international laws.

The gecko known for its blue-grey skin and loud croak was on the rise in Southeast Asia and that trading this lizard both legal and illegal is being monitored by the International Wildlife Trade Monitoring Network, TRAFFIC, it said in a statement.

The lizard, called to be protected under the Convention on International Trade in Endangered Species of Wild Fauna and Flora (CITES).

The reptiles are captured across Southeast Asia, especially the Philippines as well as Indonesia, according to a new report launched by TRAFFIC.

If the trade of these geckos would continue and gone unabated it could inflict damage on the dwindling gecko populations due to hunting, according to Chris Shepherd, deputy director of TRAFFIC Southeast Asia.

They are usually killed and dried, and shipped to China for use in traditional medicine billed to cure various diseases, including HIV and cancer. Tokay wine or whiskey is also sold as an energy booster.

The recent medicinal demand for Tokay Geckos has skyrocketed, with dozens of new websites in Malaysia, a major hub of the trade, dedicated to buying and selling Tokay Geckos,” the statement said.

Claims of the gecko’s potential as a cure “may be indicative of an elaborate hoax,”according to the TRAFFIC report.

The Tokay Geckos, which can grow up to 40 centimeters (15.7 inches), are also popular pets.

Malaysia has pledged to fight wildlife smuggling, which activists say is rampant in the Southeast Asian nation due to regional demand for exotic dishes, pets, or traditional medicines derived from animals.

In the Philippines, the Department of Environment and Natural Resources (DENR) has imposed restrictions in the hunting of geckos. Stiff fines and jail terms await against violators. 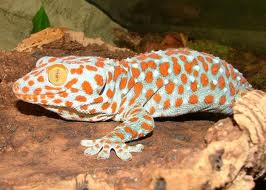